About The Square & Compass

Worth Matravers is beautifully situated on the limestone uploads of Purbeck, at the head of a valley running down between lynchet-striated slopes to the popular bathing ledges of Winspit. Once thriving on the local stone, farming and fishing industries, it has retired into a weekend refuge. It boasts an attractive church, one of the oldest in Dorset, once mother-church for Swanage. An ancient track, Priests Way, connects it to the resort as do rare buses. Folk relaxing on the wall or grassy slope in front of the pub look out over the village and the coastal setting beyond.
Want to know more? see 'Purbeck Revealed' by Ilay Cooper £9.99 available from the pub or through www.ilaycooper.com

The History of the Pub

The Square and Compass began life as a pair of cottages commanding a little bluff known as Lychard (meaning Bank), which overlooked the village and a marvelous view of the Channel. Around 1776, it became an alehouse, owned by Wareham brewer cum clay merchant, under the sign of The Sloop. There were connections with smuggling, including skirmishes with excisemen at St Aldhelms Head. A new tenant landlord, a stone mason called Charles Bower, seems to have changed the name around 1830. He ran the place for more than 40 years, to be followed by his widow, then a series of tenants until 1907, when the Newmans took over. In the interwar years the pub became a fashionable watering hole for a creative set, the artist, Augustus John, cartoonist Low, pianist Harriet Cohen, actors Leslie Banks and Gwen Francon-Davis amongst many signatories of the Visitors' Book. During the war the clientele changed to include physicists and astronomer Sir bernard Lovell and nobel laureates Sir Alan Hodgkin and Sir Martin Ryle, all developing radar nearby. The Square evaded the heavy hand of modernisation during the 1960s. Its oldest clients, some in their nineties, remember reaching up to the same serving hatch with change for ginger beer in sticky hands.

In march 1907, Charlie and Florence Newman, newly married, took the tenancy from the brewers, Strong and Co, moving from Wareham's Red lion to this rural backwater. Charlie was intelligent, shrewd and a born entertainer and Florence produced good food; the place began to flourish. His character rather than the location drew the new punters. By 1938 Charlie had achieved sufficient fame to appear on national radio and infant television. They had two children, Charlie and Eileen; this Charlie had already married with a son, Raymond, when he drowned in a fishing accident at Chapmans Pool in 1948. When old Charlie died in 1953 Florence took over the licence but Eileen, unmarried, increasingly took over the work. She held the pub until 1973, when she passed it to her nephew, Raymond. He and his wife Stella, with their children, Mary and Charlie, moved up from Lanston's King's Arms. Sadly, Stella died soon afterwards. By the early 1990s Charlie and his partner, Sarah Loudoun, were running the place. Raymond died in 1993; the following year Charlie bought the pub from the brewer. In 1998 he opened a museum of his father's and his own collection of fossils and archaeological items. Kevin Hunt took over managing the pub in 2003, Charlie shifting to a back seat role. In 2008 Charlie married Cath Bradshaw and dedicated himself to cider manufacture and furthering his fossil Collection.

Today, The Square and Compass couples three tasks: it entertains long standing patrons, refreshes walkers and tourists and draws in music lovers. There was always a touch of music. Old Charlie played the fiddle, Eileen liked the village folk playing, Raymond encouraged musicians to bring their instruments. When Charlie began to take over he gave music a formal status, booking performers from across the country. This attracted new clientele, brought a new question 'Who's on at the Square?' Meanwhile other occasions were added to the menu, including dressing up for New Year's Eve (which was exported to Swanage where it became a major event), Square Fair, the climax of a fortnight-long (July-August) stone carving session and Pumpkin Day in October, when local gardeners compete for the heaviest pumpkin. Kevin Hunt continues all these and has added an annual table-tennis tournament, a Jazz Fest in September and a bottled beer festival to close the year. Meanwhile, Charlie creates excellent cider behind the pub The square serves a variety of delicious homemade snacks. 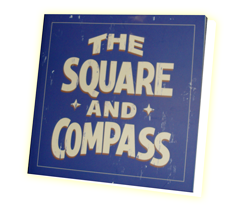 If you want to know more about this treasured little pub in Worth Matravers then grab yourself a copy of 'The Square and Compass: A Newman Century' by Ilay Cooper, illustrated by Jack Daniels, and designed by James Twist. The book contains over 150 pages that follow the history of the pub from its origins to present day, detailing the Newman family's influences and running of the Square for over a hundred years. Packed throughout with photos, paintings, and illustrations collected over the years.